Robbie Williams chose Bulgaria because of the beach 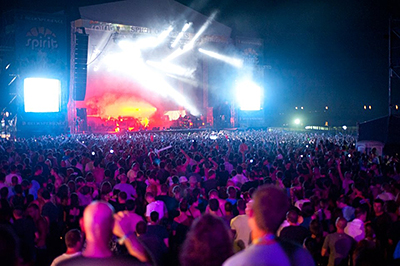 A month is left before the biggest musical project in Bulgaria, SPIRIT of Burgas. On the 7th and 8th of August, under the starry sky in Burgas, at the sea shore, the festival emotion will grip Bulgarians and foreigners, who will have the chance to enjoy a unique selection of world artists, among which will be Robbie Williams, Kasabian and Kwabs.

After 3 consecutive refusals of invitations to Bulgaria, the bad boy of the British scene has chosen Burgas and the returning SPIRIT of Burgas, for its unique location and the opportunity to perform for the first time on the beach. This way Robbie Williams will salute the Bulgarian fans with one exclusive show at one special place. The present tour Let Me Entertain You, which Robbie will present here only in a month time, includes mostly festival dates - this is the other reason SPIRIT of Burgas to attract attention of the megastar and to finally give us the chance to see live the British performer. The atmosphere of the seaside city totally tips the scales of the concert happening here. After 11 individual tours and over 600 concerts, after singing at incredible places all around the world, the great Robbie Williams will remember his show in Burgas as the first one that was on a beach. Except Robbie, on the central beach in Burgas for the first time in Bulgari we will hear and the explosive Kasabian, who will blow up the stage on the 8th of August. The magic will be supplemented by Kwabs, Stereo MC's DJ set, Milow, the special selection of artists of The World of Drum and Bass, as well as the other names from the two-day festival program.

Tickets for the festival can be bought from the network of Eventim.bg in the whole country - OMV, EasyPay, Piccadilly, Technomarket, Technopolis, NA TAMNO, ticket center NDK. Tickets for Golden Circle (only for 7 August), VIP stands with seats and two-day tickets for the whole festival are also sold.