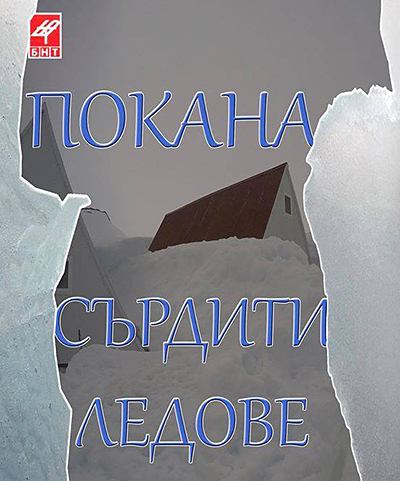 The movie "Angry ices" will be shown in hall "Petya Dubarova" in Cultural center "Sea casino" on the 8th of July from 18:00 hours. The journalist of Bulgarian National Television Tsvetelina Atanasova is author and cameraman of the documentary, which tells about the last season of the Bulgarian polar expedition on island Livingston. The powerful sequences show how our Antarctic base is in danger of staying under the snow - as a consequence of the negative influence of the global climate changes. Every year the Bulgarian scientists rely on the 4 months of work on the ice continent, but the meteorological conditions make them face serious challenges. Tsvetelina Atanasova documents in her movie the ever more notable changes, while watching the work of the Bulgarian scientists: "For me this is a second journey to the base on Livingston island. The first time I was welcomed by a group of penguins. But this year I only saw a wall of snow and ice", said the journalist: "During my whole stay, which was more than a month, the sun managed to pierce the gray clouds only once." She hopes that her movie "helps more people to learn, what has happened, what is happening and what will happen on the planet Earth". Director of the movie is Milan Kuzov, producer - Petya Tetevenska. Born and raised in Burgas the top journalist of the national television, student of NSMSA "Prof. Pancho Vladigerov" will show also sequences, related to the building of the chapel at the Bulgarian base in the Antarctic.

The challenges are in the blood of Tsvetelina Atanasova from several generations, the passion for writing and telling stories - also. She always tries to narrate "short and clear". Probably because of this she is so good in the movie "stories" - where the three dots are in a form of pictures.

"I am really proud, that in my veins is flowing Burgas blood. The family of my mother Katya Yankolova is part of the history of Burgas. My great grandfather is the leader voivode of Ilinden-Preobrazhenie Uprising Stoyan Petrov. My family is one of the fourth, which form the life and vision of Burgas. And I am a descendant and carrier of this strange substance of sea water (or salt) and desire for free flight."

The development of the substance continues in the unthinkable on first at first glance combination of music and sports. The musicians usually protect their hands and voice, and the athletes cannot go without injuries during their daily trainings... But this "unthinkable" does not count for the descendant of revolutionaries, learning to walk on the ledge between the water and the ground, while she tries to reach a wave of the native beach!

"I am born in Burgas, I have learned to walk on the central beach, chasing a wave... I studied in Burgas - school "St. St. Cyril and Methodius", after that in the Middle music school (today - MSMSA) Prof. Pancho Vladigerov" with specialty piano and solo singing. But, the genes of great grandmother Paraskeva are stong - she wrote poetry, I wanted to tell stories - about everything, which my eyes see, the things people around me do not know. Mostly - about the see - at 14 years old I was already in the national underwater sport and... from the music I flew to the cinema...I began to make movies for life underwater. From there my journey took me in the Studios for Documentary movies "VREME" /TIME/ and BNT. And I am still in BNT - in the news of the National media, but I continue to search for the interesting and tell with pictures and words about the things, which other people cannot see. I am happy, that during the years I received lots of recognition in Bulgaria and at the international podium for this, which I have done."

Among her biggest awards are: The big prize of the Program of UN for Preservation of the environment - awarded for overall activity for preserving the environment of Black sea, The awards of the film festivals in Bratislava 1988, Sardinia - Italy - 2004, Award of the European commission for preservation of the cultural and historic heritage with the movie "Nesebar - the not-sunken town" -1994 - from Bansko film fest - 2004, Prize of the Swiss government for journalistic activity about the case "Golden pearl", Media grand prix 2014 for the movie "The new-comers" and many more.

"Adrenaline and passion for discovery are the two things, which interest me, and of course the opportunity to give through my eyes all my experience to the people around me." - in this manner Tsvetelina Atanasova summarizes her aspiration for the extreme journeys with a camera in hands. Probably one of the most extreme are the frames, which we will see on Wendesday, only a few steps away from the place, where the author made her first steps, marked by the substance of the free flight.