Home    News    The front man of Kasabian declined a role from the daughter of Francis Ford Coppola
Font: A A A
02 July 2015   Print 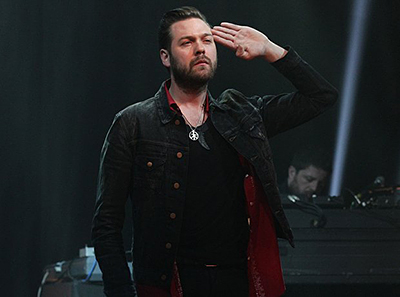 The vocal and front man of Kasabian - Tom Meighan has declined a role in the film "Maria Antoinette" of the daughter of the great Francis Ford Coppola - Sofia Coppola, and produced by the director of "The Godfather".

10 years ago he was invited to play the role of the Swedish soldier Hans Axel von Fersen, whose name is related to the biggest secret of the life of Queen Maria Antoinette. Despite his acting skills, which are regularly mentioned by his band mates, Tom decided to decline the offer, because in the last years he was devoted to music, and to the development of the band.

"Tome Meighan is a great actor. It is true, that they wanted him for the role. I think, that someday we will really see him on the big screen", said the guitarist of the band Sergio Pizzorno. According to him, a bin number of roles await Tom, because of his talent, but the important thing now was to focus on the development of the band. "He is so talented, that he may win an OSCAR someday", added Pizzorno.

The achievements of Kasabian during these last years show that the decision of Meighan was right. In 2014 Kasabian were headliners of the Glastonbury festival, at which they presented hits from their last album 48:13; the hits will be performed also in Bulgaria on 8 August. Kasabian are taking part in this year's edition of SPIRIT of Burgas. Live under the stars you will have the chance to hear their greatest hits, like Days are forgotten, Underdog, Fire, Club Foot and many more from their 5 successful albums.

SPIRIT of Burgas will be held on 7 and 8 August at central beach Burgas; among the other names, which will participate in the festival are ROBBIE WILLIAMS (UK), MILOW (BE), KWABS (UK), STEREO MCs DJ set (UK), BASSKA (RO), CONQUERING LIN (MK), and some of the best Bulgarian bands and performers.