Youth theater school Burgas is again at the top 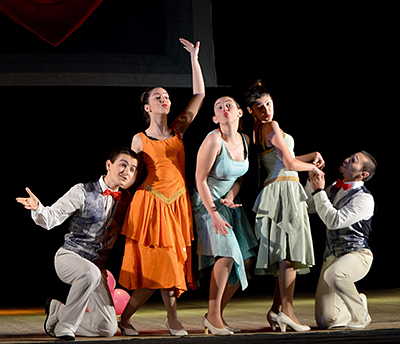 The theater school of Youth cultural center Burgas with artistic director Rumen Velev won the big prize of Grand Prix of III International theater festival "Friends of Bulgaria". It was held in the end of June in resort complex "Albena". The prize was given for their performance of "Love is known, until death it will last" by the Czech author Zdenek Podskalski.

The young actors are competing for a third consecutive year with troupes from Bulgaria and Russia. They performed on the stage of Theater "Albena" in front of a committee, led by the director of Dobrich Drama Theater "Ivan Mandev".

This is the third big recognition this year for the young actors - Mihaela Mihaylova, Teodora Nedkova, Sara Arakelyan, Dobrin Katerov and Kaloyan Nenchev, after they won first place for theater play and prize for acting team from the biggest children and youth theater festival in Bulgaria "Burgaski izgrevi" /Burgas sunrises/ and "Malkiyat princ" /The little prince/ - special prize of Municipality Veliko Tarnovo.