It is time for beach tennis; the national tournament is this weekend in Burgas 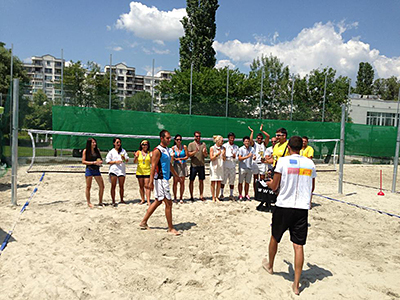 It is time for beach tennis. On 4 and 5 July /Saturday and Sunday/ Burgas will host the National beach tennis tournament; competitors from Sofia, Plovdiv, Stara Zagora and other centers of this sport will take part in the event. At least 8 will be the representatives of the hosts and organizers of the attractive competition from "Chernomorski plajen klub Burgas" /Black sea beach club Burgas/. Among them there will be kids from Social home "Ronkali", who are fans of beach tennis and regularly train.

The format of the tournament, which by tradition attracts a big crowd, includes doubles matches and mixed doubles matches. The competition, which is part of the events marking "Burgas - European city of sports 2015", is for children up to 12 years old, boys and girls from 12 to 16, and for men and women. On Friday from 18 hours starts the registration of the competitors, after which a press conference will follow. The start of the national tournament is on Saturday from 09:30 hours at Central beach, Burgas. The event will continue on Sunday. After the matches there will be an award ceremony, which will happen between 12:00 and 13:00 hours. There will be catering for children, announced Konstantin Stoyanov - director of "Black sea beach club Burgas".