W.A.S.P. Will Come in Burgas on the 4th of August 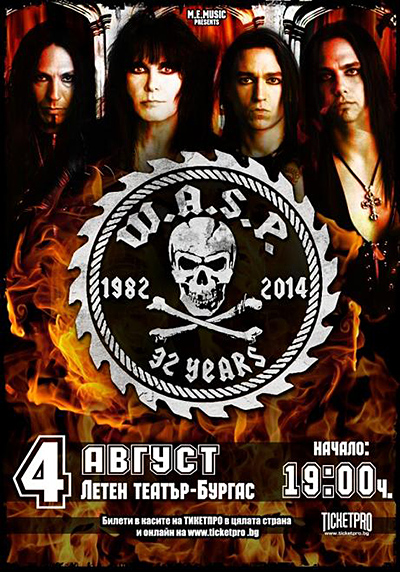 The legendary among fans of the hard music band W.A.S.P. will have concert in Burgas on the 4th of August this year. This was confirmed by the organizers from M.E. Music. The band will play on the stage of Open Air Theater at 19.00 o'clock.

The sale of the tickets starts on the 18th of February at 9.00 o'clock:

-Ticket prices on the day of the concert: 50 lv

W.A.S.P. is a band that doesn't need an introduction. It is one of the greatest legends in the rock music for more than 30 year. The band was founded in California in 1982 and during its long career won millions of fans worldwide. W.A.S.P. has 14 studio albums in its discography.

The W.A.S.P. show in Burgas is a part of the major anniversary tour of the band "30 Years of Thunder", which started in 2012 in London and continues to this day. So far they have passed through dozens of countries and the music critics has defined it as the best show of the W.A.S.P. of all time.