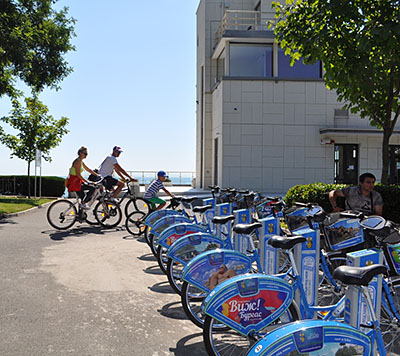 A talking speaker, 24 hour connection with a call-center, informational visualization of the tourist attractions, cultural program, built in cameras, microphone and limited series of 120 modern bicycles. These are the innovations in the municipal rent-a-bike system in Burgas.

6 new terminals are working for the guests and residents of the city from today. The mayor Dimitar Nikolov inspected on place the modern system, and the technical characteristics of the new bicycles. He personally send the first SMS at number 13 566, which can be used to pay the tax. Except SMS, the new bicycles can be rented with a velocard, debit or credit card. The first two options can be used to pay on the stationary kiosks.

“Two years ago, when we started the project for renting bikes, its full realization seemed exotic, there were many sceptics. Happily, the realization is going along smoothly. It is being upgraded continuously, and we aim to secure full comfort and security for the residents and guests of Burgas. The rent-a-bike system is the only competition of Burgasbus”, said the mayor Nikolov.

The 6 new working terminals are located near the Cultural center “Sea casino”, monument “Panteona”, Burgas Free University, Graphic base, Youth cultural home and Bus station South /will start working after the reconstruction of the bus station/. Until the end of July a rent-a-bike station will be built at Sea station Burgas.

The “smart” machines give instructions on 3 languages /Bulgarian, English and Russian/. Then new maneuverable bikes are made especially for Municipality Burgas. They are branded with photos of cultural attractions, have a built-in GPS. The model is lightened; color diodes have been installed, which provide convenience and security during riding in the night. Also during the summer season in Burgas will be released rickshaws for kids for rent.