Children are looking for treasures in the Casino 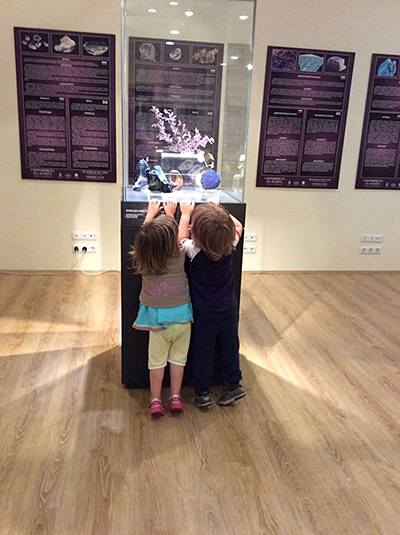 The Sea casino gives a chance to its youngest visitors to enter the role of treasure seekers. The adventure is part of the exhibition "Treasures of the Earth", which presents crystals from all over the world.

The little seekers can win a prize, by taking part in an interesting game. For that the children need to find specific exhibits and write mark their names on a special colored cards. One of the aims of the initiative is for the children not only to examine closely the precious stones and minerals, but also to learn more about their origins and properties.

The exhibition "Treasures of the Earth" is enjoying a huge interest. For two weeks it has been visited by more than 1300 people of different ages. The attention the public is attracted mostly by the gigantic crystals, the amethyst geode, the series "Nature draws", and from the multimedia presentation in the hall.

The collection contains unseen until now exhibits of the funds of the museum. Similar perfect crystals, as big as a man, are seen in nature extremely rare. The visitors will also have the chance to see also the biggest piece of Bulgarian native gold, which weighs at 36 grams.

In the show cases of the casino are also extremely rare precious exotic stones like tourmaline, royal opal, scapolite, kunzite, tanzanite, cyanite, danburite and diaspore, whose price is close to that of diamonds.

9 gigantic crystals from Brazil will be presented as a part of the exhibition. The heaviest of them weighs 300 kg. and for the first time leaves the permanent exhibition in Sofia. They are unique in their size and form, which have formed in the span of millions of years in large cracks in the Earth's crust.

Most of the groups visiting the exhibition halls in the Sea casino are families. Every visitor has a chance to take a piece of nature's treasures, by buying a small stone of the specialized stand in the Casino. The exhibition "Treasures of the Earth" will be on display until 9th of August.