Home    News    Bingo and Shaun Murphy with a "rematch" of the World Snooker Championship final in sports hall "Mladost"
Font: A A A
19 June 2015   Print 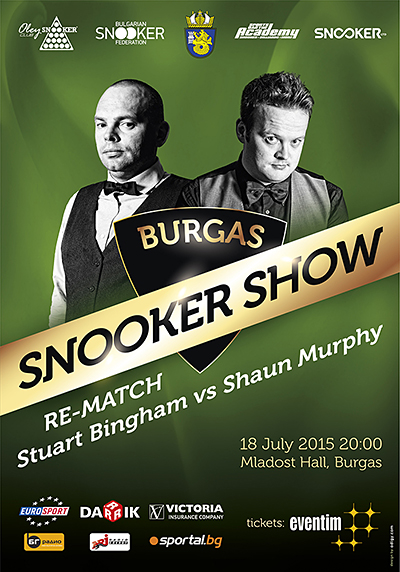 In a month time guests and residents of Burgas will have the unique opportunity to watch live "a rematch" of the final of this year's World Snooker Championship. On the 18th of July one against another in sports hall "Mladost" will be Stuart Bingham and Shaun Murphy. This is happening only three months after the final in "Crucible", where Bingham won the title. Shaun Murphy has being playing incredible snooker for a steady 10 years - he has one world title and two lost finals. On the other side Bingo is the most progressing player in snooker, despite being 39 years old. To become world champion this year, he eliminated the favorites Ronnie O'Sullivan and Jud Trump.

Except in Burgas, matches between Bingo and Shaun Murphy will be played on the 17 of July in Sofia and on the 19th in Sozopol. The rising stars Oliver Lines and James Cahill will arrive along with world championship finalists. Organizer of the big event is Olisnooker club, under the aegis of Bulgarian Snooker Federation. From the Bulgarian side in the demonstrational matches will participate Bratislav Krastev and Georgi Velichkov.

In Burgas the event is realized with the support of Municipality Burgas, on occasion the markng of "Burgas - European city if sports 2015".

VIP tickets will give a chance to the most devoted fans to meet with their favorite players 1 hour before the match, at a specially organized cocktail-party. There they will they can become acquainted with the stars and get their autographs.