The musketeers from "Korsar" marked their most successful sporting year

Home    News    The musketeers from "Korsar" marked their most successful sporting year
Font: A A A
18 June 2015   Print 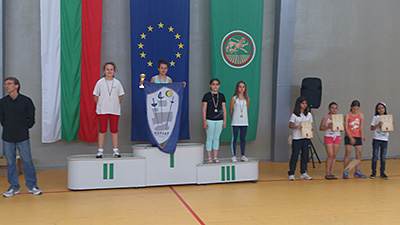 With the 4th round of Cup Bulgaria ended the sports year of the inner calendar of Bulgarian fencing federation.

The young musketeers of club "Korsar" Burgas again presented themselves in a fitting manner, and proved that their growth this year is not by chance and they have a future in this aristocratic sport.

Again the girls up to 11 years performed the best.

In the little ladies group Mihaela Nikolaeva won a third consecutive round of the competition and thus won Cup "Bulgaria".

In the final standings for the cup on 3rd place was another representative of the club Kristina Milanova, and Anya Kirova finished 5th.

In the boys group of this age the first medal for the season won Boris Simeonov, who won bronze in the competition. In the final standings for Cup "Bulgaria", Aleksandar Yanev finished 3rd.

In the group up to 13 years all athletes from the club performed well. With the best places were Mihaela Nikolova 3rd palce, Kristina Milanova 5th, Anya Kirova 7th and Georgi Aladjov 8th.

After the end of the sports year from the club are noting that it is the most successful until now, in the short history of the club. During the year were won 4 golden, 2 silver and 8 bronze medals from the state championships, as well as the team title for girls up to 13 years old. The first medals from international competitions were also won - 1 golden of Anya Kirova and two bronze of Mihaela Nikolova and Kristina Milanova. The trainers and the management thank all athletes for their hard work and devotion.