KASABIAN are the second headliner on SPIRIT of Burgas 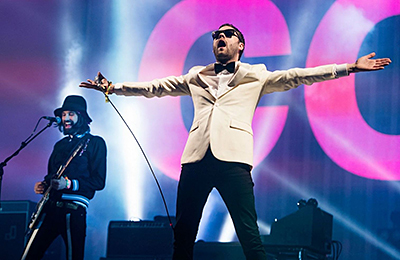 Tickets for the second day of the festival cost 60 leva

5 super successful albums, 13 awards won, including for "Best British band" and "Best live band" - this is a small summary of KASABIAN of the media around the world. The British group is regularly mentioned as one of the best on the 21st century and last year, not by chance, they were headliners on one of the most emblematic festivals on the planet - Glastonbury.

Today Municipality Burgas and Karma Events with pride announced, that KASABIAN officially have confirmed their participation in SPIRIT of Burgas this year. On the 8th of August we will have the chance to hear the biggest hits of the band, like Days are forgotten, Underdog, Fire, Club Foot, Man of simple pleasure and many more.

Founded in 97, Kasabian pass through several transformations, to reach their current known form: Tom Meighan (vocals), Sergio Pizzorno (guitar, back vocals, piano and percussions), Chris Edwards (base) and the newest member Ian Matthews (drums). The style that describes Kasabian, is a rebellious mix of alternative rock, indie rock, neo-psychedelic with some electronic. The music fan's spirit would have trouble staying indifferent towards such a combination of sounds. The specific attitude for making music and the excellent style of the group are showing since their first album "Kasabian" (2004), and after that the critics started comparing them to Muse, Arctic Monkeys and even Oasis. Four more albums follow - Empire (2006), West Ryder Pauper Lunatic Asylum (2009), Velociraptor! (2011) and their last 48:13 (2014).

"Real, genuine rock, which sounds unimaginably well live", is Kasabian's music according to The Guardian.

SPIRIT of Burgas will be held on the 7th and 8th of August at central beach Burgas; among the other performers that have confirmed their participation are Robbie Williams (UK), MILOW (BE), Kwabs (UK), STEREO MCs DJ set (UK), BASSKA (RO), Conquering Lion (MK), and some of the best Bulgarian groups and artists.

Tickets for 7 August at the price of 99 leva and 60 leva for 8 August can be bought in the network of Eventim.bg in the whole country - OMV, EasyPay, Piccadilly, Tehnomarket, Tehnopolis, NA TAMNO, ticket office NDK. Also sold are tickets for Golden Circle (only for 7 August), VIP stands and seats and two-day tickets for the whole festival.

More news and information at Spiritofburgas.com