Home    News    The state acrobatics championship in Burgas marked out the future of the sport in Bulgaria
Font: A A A
16 June 2015   Print 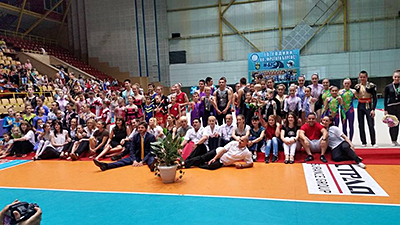 The two clubs from Burgas - "Neftohimik 2011" and "Burgas", triumphed with their athletes in the age groups 6-8 and 9-11, which gives them real chances in the following years to take over the first places in the higher age groups.

In the two competition days, the youths 12-18 and 13-19 age groups gave lots of surprises and seriously upset the plans for medals of most clubs. Until then end of the final day, 13 June, the strongest competition was in the women doubles and triplets.

The athletes of all 12 clubs were very well prepared and gave the spectators lots of emotions.

Club "Burgas" performed well in the Women double and Men double for youths 12-18 years old. Plamela Yotova and Yoanna Petrova won silver medals in the balance combination, gold in the tempo and gold in the mixed combination; Nikola Georgiev and Panayot Dimitrov won silver the all the 3 combinations.

With their overall standing in all age groups, the two clubs from Burgas filed their ambitions for medals in the future completions.

The standings of the other clubs:

Club "Olimp" Lom has 3 medals in the balance, tempo and mixed combination - silver for the men youth double and gold for the quadruplet in age groups 12-18 and 13-19. The women youth triplet won silver in the tempo combination and bronze in the mixed.

With 2 medals in each combination in different age groups are the clubs "Lokomotiv" Ruse, "Pleven" and CSKA.

All the clubs, participating in the State individual acrobatics championship gave a high rating to the organizers of the event.  In their opinion, the high level of organization has helped for the good performance of the athletes.