Home    News    A brilliant performance of Shore Invaders in the dirt jump competition in Burgas
Font: A A A
15 June 2015   Print 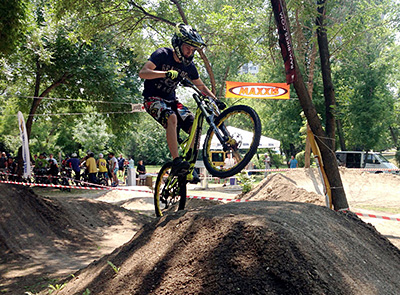 On 14 June /Sunday/ the club from Burgas Shore Invaders hosted an off-road bike competition in the discipline dirt jump. It was held at a specially prepared for such an occasion field at the bike park in Burgas; co-organizers for a fifth consecutive year were the ladies from Zonta club Burgas.

The winners received monetary and other rewards from the organizers and sponsors of the competition.

We remind you, that there is less than a month left before the biggest event, organized by Shore Invaders – the Downhill Burgas 2015, which will be held for a second consecutive year in the region “Shiloto” near housing complex “Meden rudnik”. The event will attract the elite of mountain bike riding in Bulgaria. DH Burgas 2015 will be on 12 July.

Meanwhile with yesterday’s competition was started the summer season for the bike schools, which renews its weekly classes in the bike park. As always they will be every Monday, Wednesday and Friday from 18:00 hours.