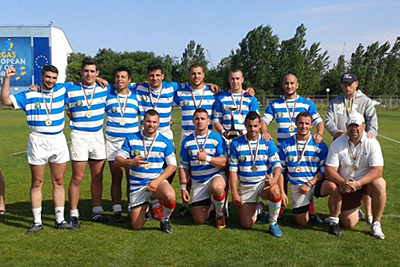 The team of National sports academy /NSA/ became champion of Bulgaria in rugby 7 for men.

Burgas was host for the first time of the State championship, and according to specialists has managed perfectly. The matches were played at the well prepared training grounds of stadium "Chernomorets" in district "Akatsiite". The final reached the teams of NSA and "Valyatsite" - Pernik. The students, led by trainer Pavel Velkov demonstrated higher class and deservedly won against their opponents.

The cup and the golden medals were given to the champions personally by the mayor of municipality Burgas Dimitar Nikolov. The silver medals were awarded to "Valyatsite" by the president of Bulgarian rugby federation Atanas Zafirov. The bronze medals went to "Yantra" - Gabrovo.

The places from 4th to 8th respectively went to - "Akademik" - Sofia, "Varvarite" - Sofia, "Lokomotiv"- Sofia, the debutatns from "Botev" - Burgas and "Spartak" - Varna.

For supporting the development of rugby in the country, the mayor was awarded with a cup, medal and a rugby ball.

The possibility of the candidature of Burgas for host of the European rugby championship was discussed. The idea is gaining popularity and supporters. Rugby 7 is becoming more famous and it will debut as an Olympic sport in the forthcoming Olympic games in Rio de Janeiro in 2016.