MIXED UP 2 Gathers Modern Art in an Exhibition 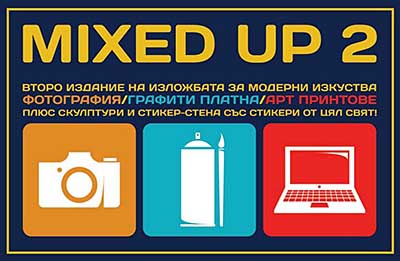 The first edition of the exhibition "MIXED UP" was held in January 2013. It attracted great interest among the audience of Burgas with its combination of photographs, graffiti paintings and art prints. More than 20 artists presented their works and among them were Burgas graffiti artists like Esteo, Dilom, Raveo, the photographers Dimitar Chobanov, Senna Ayd, Dimtiar Rusev and others.

The second edition of "MIXED UP 2" exhibition will be held in February 2014 in Cultural Center "Sea Casino". This time the exhibition will be much more major with international participation and will fill two halls of the cultural center - "Georgi Baev" and "Alexander Georgiev - Kodzhakafaliyata".

The exposition will be opened on the 4th of February at 18.00 o'clock with musical set by DJ Jef Cut and residents and guests of Burgas will have the opportunity to see it until the 26th of February. There will be over 50 authors with 150 works.

The exhibition is organized by ME Click and Burgas Municipality.