Home    News    Players from TC "Chernomorets" won the traditional state tournament in Burgas
Font: A A A
25 May 2015   Print 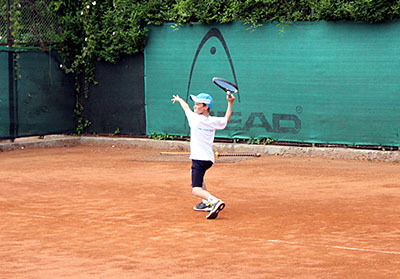 The players of Burgas Tennis Club “Chernomorets” won the state tennis tournament for “Cup Chernomorets 2015” for kids up to 12 years. It was held from 19 to 23 May in Burgas; the golden success was thanks to Dinko Dinev and Dragomir Draganov at doubles. At the finals they did not leave any chances to Nikola Keremedchiev and Todor Gutev from clubs “Dema” and “Loko 98” and won 6:1, 6:0.

And this year “Cup Chernomorets 2015” was played on excellently prepared courts in the park “Ezero” in Burgas. The event is traditional and is held every year during this period. In it always are participating the leading clubs from Sofia, Plovdiv, Varna , Pazardjik and other cities.

Later in the summer the U14 tournament “Cup Chernomorets 2015” will be held. It also carries points for the rankings of Bulgarian tennis federation. It will be between 31 August and 4 September in Burgas.