Michel Platini: Burgas is a very beautiful city with charming people! I remain your friend! 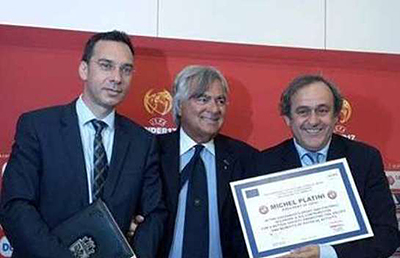 "For Burgas - one very beautiful city with charming people! I remain Your friend!" - this was written by Michel Platini in the guest book of Burgas on invitation of the mayor Dimitar Nikolov. The president of UEFA landed several hours ago on airport Sarafovo, to watch the final of Euro 2015 tonight at stadium "Lazur". Before that he took part in a press-conference with Borislav Mihaylov - president of Bulgarian Football Union.

"The sky is more blue here than in Sofia. I am exceptionally pleased from the organization of the tournament. I congratulate for this BFU and Burgas", said Michel Platini.

The mayor Nikolov gave to the French football legend a statuette of St. Nicholas - the protector of Burgas. Michel Platini also received a special honorary diploma of thanks from Gian Francesco Lupattelli - president of the organization ACES, which has given Burgas the title "European city of sports 2015". He will also be on the stadium tonight. There we will also see Zinedine Zidane, who arrives to watch his son Luca - the goalkeeper of the French team.