Stiliyan Petrov: This, that has been achieved in Burgas for the hosting of Euro 2015 is incredible 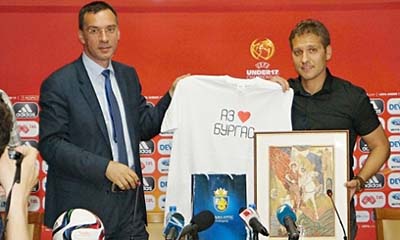 *For the final the entrances of the stadium will be closed in 19.00 hours, the closing ceremony will start at 18.30 hours!

"Good future for Burgas" wished the big name of Bulgarian and English football Stiliyan Petrov in the special book of Municipality Burgas, where famous people send their wishes to the city.

This happened during the press-conference for the closing of U17 European football championship on Friday.

"Lots of efforts are needed for the organization of such prestigious tournament. This, that we have achieved regarding training and the training bases is incredible", said the legend of Bulgarian football Stiliyan Petrov.

He said also, that he is delighted to see how the Bulgarian audience has shown, despite the hard years for sport, that it is a nation that cherishes football. He called upon the fans to fill stadium "Lazur" for the final of Euro 2015 on Friday. The official closing ceremony will begin at 18.30 hours, and the entrances to the stadium will be closed at 19.00 hours, an hour before the match between Germany and France.

The former captain of the Bulgarian national team and current trainer in "Aston Villa", who is an ambassador of the U17 European championship, gave a football with his autograph to the mayor of Burgas, and the football star received a painting of a painter from Burgas.

Special guests of the final on stadium "Lazur" will be the president of UEFA Michel Platini and the former French national player - the legendary Zinedine Zidane.