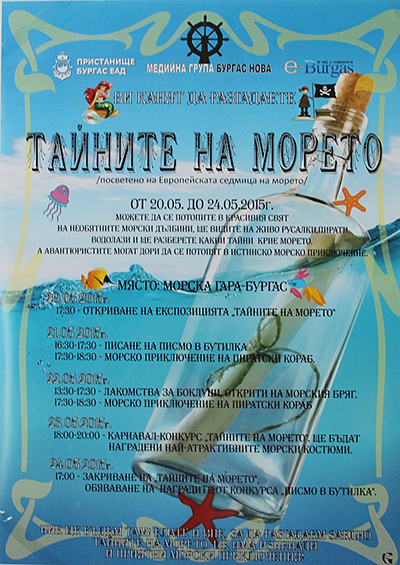 Burgas is a part of the European week of the sea for the 4th consecutive time. The days between 20th and 24th of May are devoted to events, related to one of the biggest treasures in Burgas.

The beginning of the European week of the sea will be given today, on the 20th of May, with a concert at the open-air stage “Ohlyuva” at 17.30. The organizers are the Club of sea veterans and Municipal children complex; Children folklore choir “Trepetlika", Children folklore ensemble “Radost” and troupes from other municipal children establishments will participate in the events.

Residents and guests of the city will have the chance to see the exhibition “The Secrets of the Sea” at Burgas Passenger Terminal – Port of Burgas from the 20th of May. The opening of the exhibition is at 17.30. The only pirate ship in Bulgaria – “Esmeralda” will berth in Port of Burgas and it will await its passengers to “sink” them in the magic of pirate tales and adventures.

The 21st of May is devoted to the romanticists. People will have the opportunity to write a letter that will be sealed in a bottle from 16.30 to 17.30. Everyone, who has cleaned the beach of garbage, can receive sweet goodies on the 22nd of May.

The events, marking the European week of the sea, continue on the 23rd of May at 18.00 o`clock with a carnival-competition for the most attractive sea costumes and the best will receive prizes. The closing of the exhibition “Secrets of the sea” is on the 24th of May at 17.30, when the winners of the competition for writing a letter in bottle will also be announced.