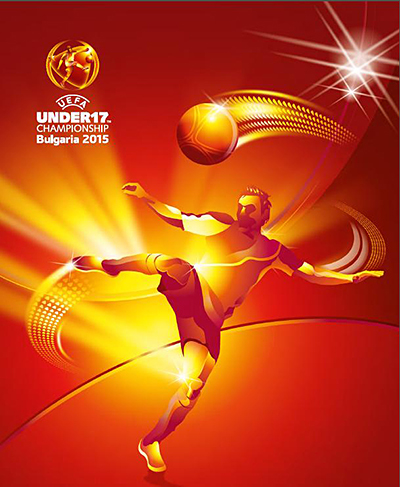 The big football day is coming in Burgas. The date is 22 May /Friday/. The place is stadium "Lazur". There at 20:00 hours will start the final match of the U17 European football championship, which is played in Bulgaria.

The president of UEFA Michel Platini will arrive in Burgas hours before the final. He will personally award the winning team with the cup.

The teams battling for the precious trophy on Friday are Belgium, France, Germany and Russia. They reached the semi-final stage of Euro 2015.

The outcome of the semi-finals will be known tomorrow /Tuesday/. The intriguing match between Belgium and France will start at 16:00 hours at "Lazur" stadium. From 19:00 hours at "Beroe" stadium in Stara Zagora is the clash between Germany and Russia.

It is already clear, that for the final in Burgas on Friday high-ranking officials of UEFA will be present.

"Michel Platini is coming, with hopes to see a full stadium. The president of UEFA has declared his satisfaction of the organization and flow of the tournament", said the Director of the tournament Pavel Kolev.

The president of the Association of European capitals and cities of sports Gian Francesco Lupatelli will also arrive for the final. The association works in partnership with the European commission, which picked Burgas for a "European city of sports 2015". Under this motto is held the football tournament.

On stadium "Lazur" for the final on Friday will be the big names of Bulgarian football, led by the president of BFU and member of the executive committee of UEFA Borislav Mihaylov. In the stands will be the vice-presidents Mihail Kasabov and Atanas Furnadjiev, the famous "executioner" of France from 1993 Emil Kostadinov, now a member of the executive committee of BFU, Bulgarian manager N1 for XX century Dimitar Penev, former national players, among which Martin Petrov, Zlatko Yankov, Radostin Kishishev, Petar Mihtarski, the managers of the national football teams U21 and U19 - Antoni Zdravkov and Svetoslav Todorov.

The ambassador of Euro 2015 Stilyan Petrov will also be among the VIPs.

Lots of managers will also be present. Among the football agents is expected to be the son of the great Sir Alex Ferguson - Jason Ferguson, who owns a football agency.

If France qualifies for the final, the football legend Zinedine Zidan is expected to arrive. His son Luca Zidan is the goal keeper of the young French team. He has played four games in the tournament, and has not conceded a goal.

All spectators on "Lazur" stadium tomorrow at the semi-final match between the teams of Belgium and France will have the opportunity to see live Zidan-junior on the goal line. Specialists are considering the French for favorites. Their goal difference this tournament is excellent - 10:0 in 4 games.

The two teams that will reach the final will be known on Tuesday.

The final is expected to be a matching end to a very competitive tournament, in which the U17 talents of Europe are showing their best.

On stadium "Lazur" on Friday we may witness the rise of the successors of Manuel Neuer, Cristiano Ronaldo, Frank Ribery, Karim Benzema, Arjen Robben, Tony Kroos and Thomas Muller.

Certainly this will be the tournament that will launch these young talents to the Big Football stage. We will speak highly of them, knowing that they showed their huge potential on the stadiums in Burgas, Sozopol, Sliven and Stara Zagora.

The mayor Dimitar Nikolov is calling all residents and guests to come and fill the stadium with an unforgettable atmosphere - 22 may /Friday/ from 19.00 hours begins the official ceremony for closing the tournament, and from 20:00 hours begins the final match.