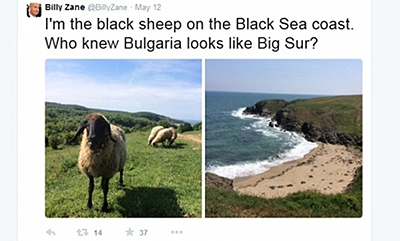 The Hollywood star Billy Zane was spotted in Burgas. He got out of a white bus at a local gas-station and bought some things. The actor was very polite and earthly. Later in the day he posted on Twitter, that he has visited the region: “I’m the black sheep on the Black sea coast. Who knew Bulgaria looks like Big Sur?” The star has added two photographs of nature – the first photo is of some sheep, one wearing a collar, and the second photo is of a rocky beach. He compares the Bulgarian shore with the region Big Sur in California, well known for its stunning beauty, where the mountain Santa Lucia steeply rises from the waters of the Pacific.