Austrian symphony in the Opera today 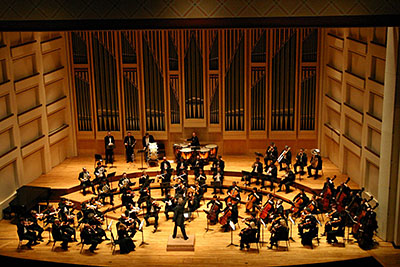 Today /Friday/ from 19.00 hours residents and guests of the city will have the chance to enjoy a concert, performed by Symphonic orchestra of State opera Burgas. Under the conductor’s baton of Ivan Kojuharov and with participation of the soloist Johannes Ettlinger /trombone/, will sound the works of Karl Goldmark, Georg Christoph Wagenseil and Franz Schubert.

In the program are included:

Concert for trombone and orchestra

From 1976 he first conductor and then head conductor of the Burgas opera, head conductor and head art director of the Burgas philharmonics. From 1999 to 2001 he is conductor of State opera in Izmir (Turkey). A regular guest-conductor of the Philharmonics in Saint Petersburg, the Presidential symphonic orchestra and orchestra “Prima la musica” in the city of Aalst (Belgium). In 1979 he was a semi-finalist in the competition “Herbert von Karajan” in West Berlin, and in 1980 – laureate and winner of the Big prize in the name of Bela Bartok of the third international competition for conductors of the Hungarian television in Budapest. He has conducted oved 1300 concerts with opera and symphonic orchestras in the opera houses in Budapest, Sofia, Izmir, Mersin, Plovdiv, Varna and Pleven, as well as Romania, Czech Republic, Slovakia, Serbia, Germany, Russia, Estonia, Italy, France, Spain, Greece, Egypt, Cuba, Turkey, Switzerland, Belgium and others.

*Johannes Ettlinger is born in 1983 in Amstetten, Austria. He studied in the University for Music and Scenic arts in Vienna, in the Royal academy for music in London, and in Bruckner conservatory in Linz. In 1998 he received the highest award in the competition “Prima la musica”. He was a solo-trombonist in the Vienna orchestra “Jeunesse”, of the Youth philharmonics Vienna and from 2006 to 2008 of the International youth orchestra Gustav Mahler. From 2008 is a member of the Scenic orchestra of Vienna State Opera. Johannes Ettlinger plays with Orchestra of Mariinsky Theater, Philharmonic orchestra of Qatar, Mozart Orchestra Bologna, Vienna symphonics, Bruckner Orchestra Linz, orchestra of Lower Austria, under the conductors: Cl. Abado, D. Barenboim, H. Blomstedt, S. Bychkov, C. Eschenbach, Vl. Fedoseyev, N. Harnoncourt, M. Jansons, L. Maazel, Z. Mehta, R. Muti, S. Ozawa and others.

The event is part of the program for marking the Austrian music weeks in Bulgaria and the Days in the Austrian culture in Burgas. Free entrance.