Home    News    Two young men from Burgas won a prestigious art competition in the country of the kangaroos
Font: A A A
07 May 2015   Print 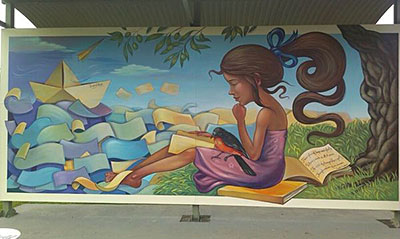 The duo Nikolay Dimitrov – Daniel Dubarov won a competition for wall painting in the city of Sheffield, which is located on the Australian island of Tasmania. Along with the huge recognition goes a financial award of 15 000 dollars, that will give security to the young painters and a horizon to work on other projects.

Nikolay has been living in Burgas for years, and Daniel is born here – he is the son of the painter Nikolay Dubarov. The two young men have studied together and have been engaged in wall painting and graffiti for a long time. Their award winning project is called “Travelling Dreams”. It was made on place by Nikolay, because Daniel could not reach Australia due to visa problems.

The festival in Sheffield, also called the city of wall paintings and graffiti, is held every year in the first week after the catholic Easter. The participants are always nine. Every year the theme of the fest is different and is given in the form of a poem. The organizers say, that the competition does not only examine the skills of the painters, but also their endurance, their ability to deal with limited time, unpredictable weather conditions and their work in front of an audience.

Comments in the foreign press about the success of the young men: