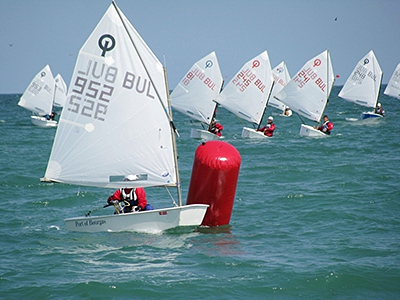 200 participants from five countries – Romania, Turkey, Kuwait, Greece and Bulgaria are part of the Burgas sailing week. The sports event is part of the program for marking “Burgas – European city of sports 2015”. Host of the regatta in classes “Optimist”, “Laser – standard”, “Laser – radial”, “Laser 4,7”, “Fin”, “470” and “420” is Yacht club “Port Burgas” from Port Burgas.

“We have a record in class “Optimist” with the smallest participants. A hundred are the contestants, who arrived in Burgas, and this has not happened for more than 25 years”, said Evgenyi Mavrodiev, president of the Bulgarian sailing federation. Until Sunday residents and guests of Burgas will have the chance to watch the competition from the terrace of the Sea casino. The regatta ends on 3 May. The handing of awards will be at 17:00 hours in Yacht club “Port Burgas”.