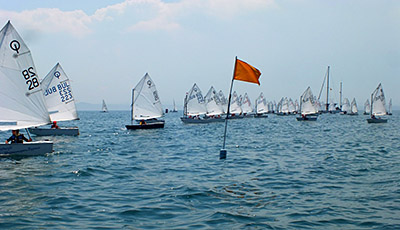 For a consecutive year at the beginning of May is held the international sailing regatta, called BURGAS SAILING WEEK. It is the biggest event in the calendar of Bulgarian sailing federation.

The regatta is realized with the help of Municipality Burgas, Port Burgas and Burgas Tag Service Ltd. It is hosted by Yach club “Port Burgas”.

From 29 April to 3 May guests and residents of Burgas will have the chance to watch the races, which will be near the Pier. The bay will fill up with the sails of young sailors, who will show their skills and will battle for victory.

Until now participants have registered in the classes “Optimist”, “Laser – standard”, “Laser – radial”, “Laser 4,7”, “Fin”, “470” and “420”. They are coming from sailing clubs in Romania, Turkey, Kuwait, Greece and Bulgaria. The referee team is made of 20 people from Regional referee association and international jury from Greece, Turkey and Bulgaria.

Preliminary program of BURGAS SAILING WEEK is as follows:

29.04.2015 – arrival, announcing of the participants and measuring the yachts;

30.04.2015 – technical conference for referees and trainers, first tournament day /races near the Pier/;

03.05.2015 – fourth tournament day /races near the Pier/, award ceremony for the winners and closing of the regatta.

For the days and time for conducting the races, will be provided a sailing vessels for organizers, sponsors, guests and journalists.

The event is part of the program marking “Burgas – European city of sports 2015”.