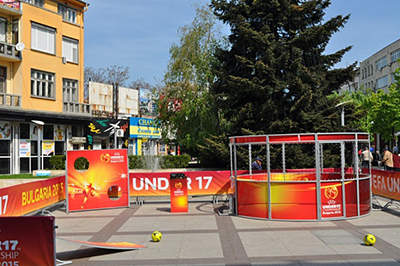 UEFA EURO FUN PARK opened doors in Burgas. The attraction is located in front of the Municipality building, at square “Atanas Sirekov”. Kids and grownups can become a part of the football emotion, by joining the games. UEFA EURO FUN PARK awaits you every weekday from 11:00 to 14:00 and from 17:00 to 20:00 hours.

During the weekends the attraction will welcome visiotrs from 11:00 to 19:00 hours.

Except fun games and competitions, the team of UEFA EURO FUN PARK will organize mini football tournaments. Anyone can sign up in the fan zone.

If you want to be a part of UEFA EURO 2015 and to feel the thrill of the stadium, you can sign up on place in the Voluntary program of the tournament or to fill in a form online at:

Except the football emotions and the unforgettable experience with friends, you will have the opportunity to win different prizes, and even a ticket for the matches of EURO 2015.

Anyone who has signed up and participated in the UEFA EURO FUN PARK games will receive a score card, with which he/she is automatically registered for participation in a lot, in which the prize is a new mobile phone by Mtel.

You can see all that about the tournament at the facebook page of UEFA-European-Under-17-Championship: