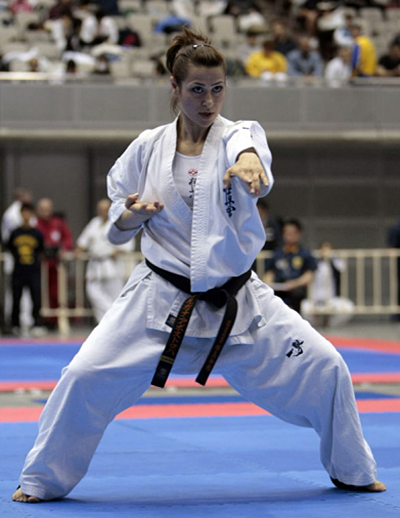 The team of Bulgarian Karate Association – IKO Bulgaria, led by the world champion shihan Emil Kostov, participated in both of the categories – Gergana Apostolova in kata and Zornitsta Kostova in kumite.

The competition, which lasted for 2 days, began with the kata discipline, where Gergana Apostolova triumphed by defeating the representatives of Canada, Poland, Russia and mainly Japan. This way the girl from Burgas won her second world title after the success in 2010. The Mayor Dimitar Nikolov sent his sincere salutations for Gergana for winning the highest prize in the sport.

In the second day of the event Zornitsa Kostova competed on kumite in the (up to) 65 kg category. She also presented herself with dignity, losing the qualifying round to the 4th placed in her category representative of the hosts of Japan. This is a useful experience for Zornitsa, who debuted in the women category and was the youngest participant among them.

Shihan Kostov was one of the main referees of the tournament.

The team of BKA – IKO Bulgaria continues the training of its karatekas for the next challenge – the European championship in categories for men, women, youths and veterans, which will be held on the 9th of May 2015 in Berlin, Germany.