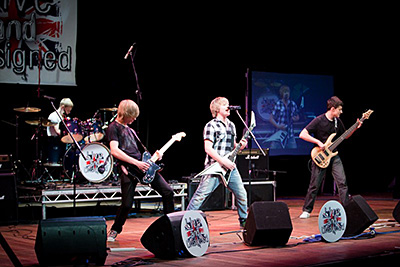 With a huge interest passed the Festival of the young pop and rock bands in Burgas. The idea of the music event was to give a chance to all young people, who love music, to play in front of an audience and show their talent.

Hundreds of fans gathered in the hall of Home of culture of the oil chemist, to listen to the future stars of the Bulgarian scene. The seven bands, which participated this year, had prepared original works and covers of hit songs from the world rock and pop scene.

For their participation the boys and girls from Waste of Ammo, Democity, Evelate, Evasion, Them Bones, Blazenrinte and For A Distance received special prizes and diplomas from Municipality Burgas.