Home    News    A complete renovation of the sports ground in housing complex "Vazradjane" thanks to the football team "Lazur"
Font: A A A
16 April 2015   Print 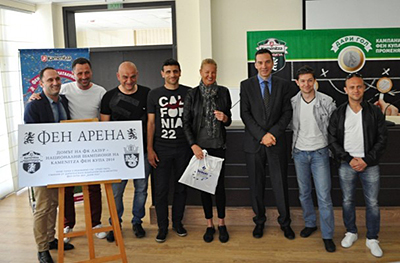 The favorite sports playground of kids and fans of sports on Debelt str. in housing complex “Vazrajdane” will be completely renovated, thanks to the boys from team “Lazur”, who won Kamenitza Fan Cup last year. One of their prizes was to decide on the place where to invest the money gathered by the camplaing “Dari Gol” /Give a goal/ - 10 733 lv.

The money were officially given today, on a ceremony with the president of Bulgarian Olympic Committee Stefka Kostadinova, who is the face of the campaign, the mayor of Burgas Dimitar Nikolov and the manager of sector “Events” in “Kamenitza” Kiril Glushkov. The congratulated the champions from “Lazur” and wished them luck in the new edition of the tournament Kamenitza Fan Cup, whose regional round for Burgas in on 9-10 May.