The authors of "Burgas nights" were immortalized 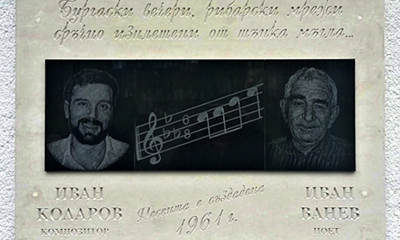 Burgas has been praised in many songs, but one of them is special. For many the song "Burgaski vecheri" (Burgas nights) is like a box full of memories. Author of the text of this song is the poet from Burgas Ivan Vanev, and the music is by the composer Ivan Kolarov. Both of them are not among us. They and their iconic song will be remembered by a memorial slab, which is already place in front of the Summer Theater in Burgas. The suggestion to immortalize the two authors came from the municipal councilor Georgi Manev and was approved by the whole city council. The slab is made by Atanas Stoyanov from Burgas.

The popular tune "Burgas nights" was born in 1961. Ivan Vanev, who wrote the text, was a turner at the ship building works in Burgas. Despite the success of the song, he has not published his poetry or other songs. On the day of St. Nikola in 2007 Vanev turned on the holiday lighting in Burgas at the invitation of the mayor Dimitar Nikolov. Ivan Kolarov is born on the 23rd of October 1948 in Burgas. He is one of the founders of the first rock group in Burgas - "Korali". Kolarov worked hard in the theater. His music has been heard in the performances of all professional and amateur theater companies, on the theater stages in Varna, Sliven, Pazardjik and Sofia. On the 22nd of December 1987 the composer was found shot at his working place in the metallurgical plant in Debelt. The official statement of his death is suicide.

Ivan Vanev and Ivan Kolarov are honorary citizens of Burgas, and their wonderful song will always be associated with the emotional performance by Eva and Gogo, who also left us recently.