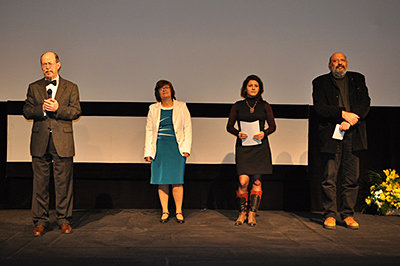 In front of a full hall in theater “Adriana Budevska” the 13th edition of film festival “Sofia film fest on the coast” came to a close. Present on the event were the deputy mayor of culture of Municipality Burgas Yordanka Ananieva, prof, Georgi Dyulgerov, Stefan Kitanov, Borislav Chakrinov and Kristina Ingilizova, who announced the winners of this year’s festival. The prize of the audience went to the film describing the Armenian genocide – “The Wound” by Fatih Akin. The movie provoked a lot of interest from the public. The favorite of the jury was “Salt of life” directed by Vim Vandes – a fascinating movie-portrait of one of the most talented photographers of all times.

This year the handing of the awards was more emotional than previous years. The organizers of the film festival arranged a surprise for prof. Georgi Dyulgerov. The talented director was awarded with an honorable statuette “Silver seagull” for his contribution to the Bulgarian and world cinematography, as well for his newest film “Buffer zone”. This film was well liked by audience and received a high rating by the film critics.

During the ceremony an idea about starting “Sofia film fest on the coast for students” was announced. This initiative will allow students to watch the movies free of cost. They will have the chance to talk to lecturers and participate it discussions, which will provoke their interest for the cinematic arts.