An extremely rare bird species spotted in the Atanasovsko Lake 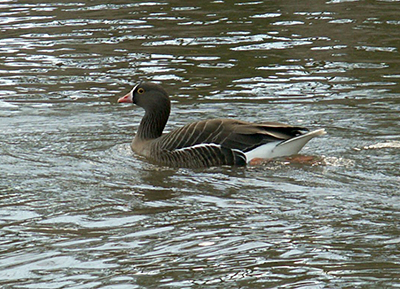 A team of BADB (Bulgarian Association for Defense of Birds) has spotted a very rare species of birds - lesser white-fronted geese (Anser erythropus). The team has come across a group of 4 birds - 2 adults and 2 younglings, which is the biggest group of this bird species ever seen in the region of Burgas. The heightened attention and the experience in recognizing these birds has led to the increase in the observations of these animals, and has made Atanasovsko Lake one of the zones with lots of such sightings in the country.

Anser erythropus or more commonly known as lesser white-fronted goose is one of the rarest and most endangered bird species, which are found in Bulgaria. Due to its similarities to the more common species – greater white-fronted goose, and to its low numbers, it is one of the birds which hasn’t been observed enough, and is one of the most endangered, due to hunting. During hunting season, when the geese are feeding in the fields, the presence of hunters scares them and makes them take flight. This does not allow them to fatten up and gather vital energy, which will be used on their flight to the nesting grounds.

For now there are no cases of killed lesser white-fronted geese in the region of Burgas, but this does not lower the risk for the bird, because even one death of the species could have an impact on the survival of the whole population, especially when the numbers are so low.