Home    News    Burgas and Its Project "The Magic of Antiquity and Beauty of Nature from Burgas Bay to Strandzha Mountain" on Tourist Archeology Exchange
Font: A A A
25 November 2013   Print 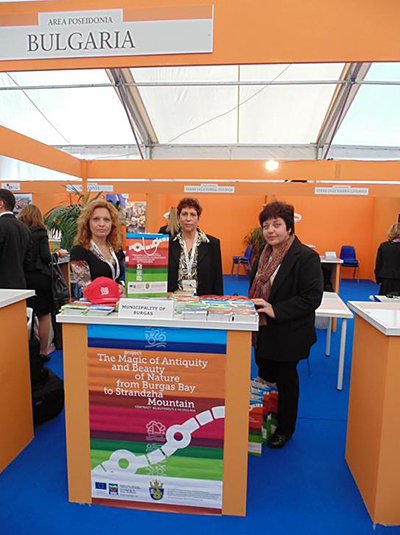 From 14th until 17th of November 2013 Burgas was presented as a tourist destination on international exhibition Borsa Mediterranea del Turismo Archeologico 2013, which was held in Paestum, Italy. This year the exchange, which is the only one in Europe with a focus on archeology, was held in the archaeological park in the Italian town. Burgas and the municipalities that are partners in the project - Primorsko, Malko Tarnovo, Sredets and Kameno, participated for the first year with the launch of the project "The Magic of Antiquity and Beauty of Nature from Burgas Bay to Strandzha Mountain". Attractive promotional materials, cards with tourist routes and packages were prepared especially for the project. The ancient history and beautiful scenery of the area from Burgas to Strandzha were presented to all visitors in exciting way.

19 different countries and over 150 local and national organizations from Italy participated in the exchange and the visitors were more than 10 000.

Honored guests of the gala evening were the President of Salerno Province - Mr. Antonio Ianone, the Mayor of Paestum - Mr. Italo Vosa, the Ambassador of Venezuela in Italy - His Excellency Julian Isaias.