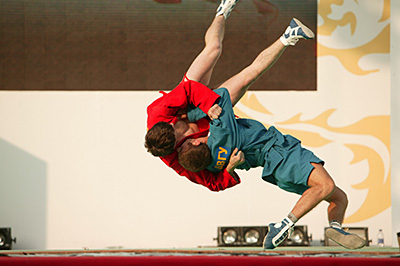 The national championship for sambo and combat sambo will be held in Burgas. Fighters of both sexes will enter the battle for the top places in one of the most challenging combat sports. Students from the National Sports Academy and members of sambo clubs from all over the country will participate in the event.

Unlike the sambo, which can be practiced by both men and women, the combat sambo is exclusively for men – it is a rough and attractive sport, with the charge of gladiatorial battles in ancient Rome. Its roots come from the USSR, where it was developed by the armed and Special Forces. The combat sambo features lots of deadly and disarming techniques. The foundations of both sambo and combat sambo come from the classical martial arts: judo, jiu-jitsu, Greco-Roman wrestling, freestyle wrestling, and a number of local wrestling styles practiced in the USSR republics. The famous MMA (mixed martial arts) have a lot in common with sambo, especially with the free-style rules used in the competitions. Lots of famous MMA fighters started their carriers from sambo and combat sambo: Fedor Emilianenko and his brother, Andrei Arlovski, Vitaly Minakov, Blagoi Ivanov and others.

The championship starts on the 27th of February and ends on the 1st of March in sports hall “Mladost” in housing estate “Slaveikov”. Don’t miss the spectacle!