Priceless pottery was discovered during the excavations of the medieval town of Rusokastro!

Home    News    Priceless pottery was discovered during the excavations of the medieval town of Rusokastro!
Font: A A A
30 September 2021   Print 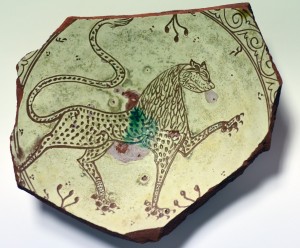 An extremely valuable find was discovered during excavations in the medieval town of Rusokastro near Debelt, said the Regional History Museum in Burgas, whose team is leading the excavations.
During the research of the reservoir of the castle, an exquisite, unusually beautiful, artistically made ceramic vessel was discovered, the decoration of which was made in the "sgraffito" technique. A leopard - a snow leopard - is depicted on almost the entire surface. The figure is 16 cm long and 14 cm high, and the leopard is presented in an attacking pose, with claws outstretched, swinging menacingly forward with his left paw.
The mane, snout, spots on the body, paws, their pillows and the angrily wagging tail of the animal are presented in great detail.
Initially, archaeologists studying the medieval city believed that the image was of the so-called. leopard lion-images characteristic of sgraffito. A similar one was found in the royal citadel in Tsarevets, in Veliko Tarnovo. They are images of lions, but with spots like leopards. Thanks to the opinion of Prof. Konstantin Totev, a long-time consultant of the archeological team and a narrow specialist in medieval applied art, they have revised their opinion in favor of leopards, explained the museum in Burgas.
Leopard is also depicted on the shield of Kaloyan's ring, which belonged to a high aristocrat from the Asenevtsi family, but who probably has nothing to do with Tsar Kaloyan himself. This ring is world famous due to the fact that it depicts this sacred animal. However, the closest analogue is an image of a leopard on a lead seal of Tsar Simeon the Great, from the beginning of the tenth century, which was noticed by the Bulgarian numismatist Vasil Mutafov, who is also part of the research team. Today, the seal is stored in a private collection in the United States.
Undoubtedly, the newly discovered find is world-class. It is dated by archaeologists from the period between 1350-1375.