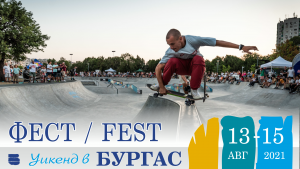 The last musical emotions from Spice Music Fest have barely passed, and here in Burgas a new shock wave of good experiences is coming! And again, there will be something for everyone! It's time for Fest weekend in Burgas!

STREET FOOD & ART FESTIVAL starts today, August 10, at the Port of Burgas. Delicious street food adventures, culinary demonstrations, entertainment for young and old, lots of music and surprises await all visitors in the three days of the festival. Admission is free.

On August 11, the "Flora" Expo Center will become an attractive center for fans of good books. There, on the alleys in front of the center, the exhibition "With a book on the beach" will be held until August 15. All readers will have the opportunity to contact directly with representatives of publishers, as well as with some of their favorite authors.

Two days later, on August 13, for the 7th consecutive year in Burgas will start one of the biggest skate events in Europe - Burgas Skate Open 2021. It will include masters of the board from Bulgaria, Romania, Serbia, Greece, Argentina, the Czech Republic, Colombia and Israel. In addition to the attractive demonstrations and competitions, the Burgas Skate Open will also include an exhibition of the most attractive photos from previous editions of the Burgas Skate Open, at the "Georgi Baev" Gallery-Museum and a cinema evening in Barabar.

At the end of the week Burgas will also host the SOLAR Summer Festival! The program of the spectacular music event will present some of the most popular DJs on the world stage in the area near the Sea Station. On the three days, August 13-15, we will hear names like Hot Since 82, Michael Bibi, Paco Osuna, Victor Calderone, Amelie Lens and Milo Spykers.

And the good things don't end there! In a few days a real Burgas jewel celebrates! On August 15, the Tourist Complex "St. Anastasia Island" will celebrate its holiday for another year. Three-day celebrations are planned, including a festive art bazaar, a large island dance, free access to the lighthouse, a special party - Solar island, as well as a wonderful concert of the State Opera-Burgas! There are also three special courses on the ship "Anastasia", which will go on a trip to the Cultural and Tourist Complex "Chengene skele". Those wishing to travel can do so on Saturday, August 14, from 10.00, 13.30 and 17.00. Departures will be made by "Magazia 1". For more information and reservations: 0882 004 124.