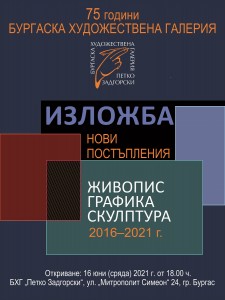 The exhibition is dedicated to the 75th anniversary of the establishment of an art gallery in the city of Burgas and the 55th anniversary of its relocation to the building of the specially reconstructed Jewish synagogue.

The Burgas Art Gallery is one of the oldest in the country. It began with the general participation of prominent Burgas public figures, artists and cultural figures. On April 7, 1946, a permanent gallery was inaugurated in the Exchange Hall of the Chamber of Commerce. The available fund of the gallery then was 58 paintings and 6 sculptures.