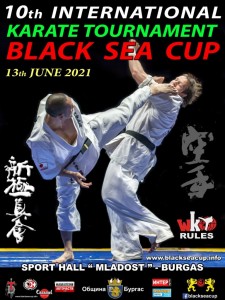 200 karatekas from 5 countries enter the battle for the awards in the 10th anniversary edition of the international tournament "Burgas Cup", which will be held on Sunday, June 13, in the sports hall "Mladost". The organizer is SC "Burgas Dojo" with the assistance of the Municipality of Burgas.

The official opening is from 11:00. Spectators up to 50 percent of the facility's capacity will be allowed in the Mladost Hall.

All other requirements of the health authorities related to the prevention of KOVID-19 will be observed.

Club teams from 5 countries will take part in the tournament - Croatia, Romania, Israel, Ukraine and Bulgaria. Due to the pandemic situation, some of the pre-announced participants from other countries will not arrive.

The hosts from Burgas Dojo will have four representatives. The competition is in the age groups - children, cadets, teenagers, men and women.

The winners will receive cups, diplomas and gifts. The awarding will be gradual, after the meetings in the different age groups, announced the organizers from "Burgas Dojo".