Home    News    Screenings of The Naked Truth about the Zhiguli group will also take place in May at the NHC
Font: A A A
22 April 2021   Print 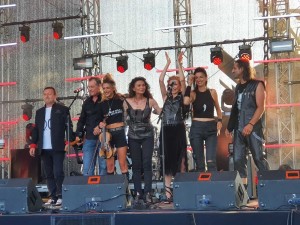 Tickets for new screenings of Viktor Bozhinov's intriguing film The Naked Truth about the Zhiguli group, which continues to set records in the home cinema, have already been put on sale.

"The naked truth group" Zhiguli "was shown in Burgas on April 12 before its big premiere in Hall 1 of the National Palace of Culture in Sofia. According to the first results from the box office - the film is number 1 in Bulgaria at the moment.

Some of the shots in the film were taken in emblematic places in Burgas. Hundreds of citizens of Burgas also participated as extras during the big sea festival - Spice music festival.

The film was financially supported by the Municipality of Burgas.
Tickets are sold at the Clock Ticket Center.