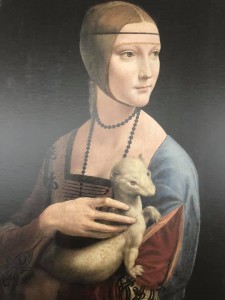 Curiously, Leonardo da Vinci's Dama con l’ermellino dates back to around 1490. The picture is painted with oil paints on a walnut board. At that time, oil paints had a relatively new technique in Italy, but Leonardo da Vinci was not afraid to experiment.

It can be said with greater certainty that the girl in the portrait is Cecilia Galerani, mistress of the Duke of Milan Ludovico Sforza.

The picture depicts a young woman with her body turned to the right and her face to the left. A similar situation is also a novelty introduced by Da Vinci. The gaze is directed outside the picture, at a third person. It remains a mystery who she is looking at. The expression is elusive, smiling and melancholy at the same time. The clothing is modest, in accordance with its origin. The hair is in a choazone hairstyle, with a braid at the back and two locks that fit snugly on the head, gathered with a veil and a ribbon.

In her hands the woman holds an ermine, a pet of the nobles, which carries a very curious symbolism in the particular picture.

The painting was bought in Italy by the Polish statesman and writer Adam Czartoryski in 1798. During World War II it was taken to Germany by the Nazis. At the end of the war she was found in the villa of Hans Frank and returned to Krakow.

The painting is currently housed in a museum in Krakow, Poland.

These and other interesting facts can be found in the photo exhibition "Treasures of Krakow". It is arranged in the "Georgi Baev" hall of the Sea Casino.

The exhibition is a kind of story about Krakow - the seat of Polish kings, a city of poets and artists, an important metropolis in Central Europe during the Middle Ages.

The exhibition "Photography" is arranged in the hall "Al. G. Kodzhakafaliyata", which shows the different face of the Academy of Arts.