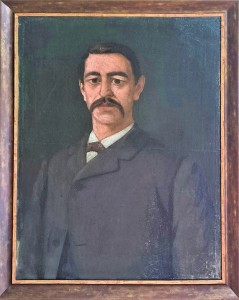 An original portrait of Georgi Rakovski from 1864 visited the Historical Museum of Burgas. The occasion is 200 years since the birth of the revolutionary. The canvas with dimensions 68x51 cm is part of the main exposition of the Art Gallery in Kazanlak. It is kindly provided for consideration by the Burgas cultural community through the mediation of RIM-Burgas.

Rakovski's remarkable portrait is little known and worth seeing, as it has not been reproduced in textbooks or hung on walls in state institutions. The image is vivid and influential, faithfully reflecting the awake intellectual personality of the incomparable cauldron. The artist is not known, but it is dated - 1864.

Those who are interested in our unparalleled national hero and keep a patriotic respect for the past, will be curious to come to the museum to learn how the work was discovered and preserved in the Art Gallery in Kazanlak.

The display of the original portrait of Georgi Rakovski in the Exhibition Hall of the Historical Museum is the way in which RIM-Burgas is involved in the large-scale national initiative to rethink the personality and work of the famous Bulgarian. The idea is to bring more and more diverse information about Rakovski's life and devotion, dedicated entirely to one goal - the liberation of Bulgaria from Ottoman rule.

The oil painting with the image of Georgi Rakovski can be viewed from Wednesday, April 14, at the Historical Museum - Burgas, 31 Lermontov Street.

The working hours of the museum are from Tuesday to Saturday, from 9 am to 5 pm, and on Sunday from 9 am to 2 pm.