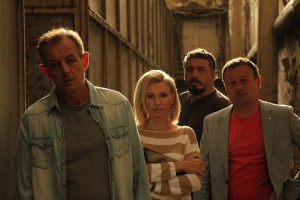 The pre-premiere of Viktor Bozhinov's new film - The Naked Truth about the Zhiguli group - will be on April 12, 2021 in Burgas. People from the city will have the privilege to watch it before it officially appears in the country's cinemas. Key shots from the film were shot in Burgas.

The film is funded by the National Film Center, and the Municipality of Burgas also logistically and financially supported its creation.

Two screenings are scheduled for the Burgas pre-premiere - on April 12 (Monday), from 18:00 and 20:00 in the Cultural House of Petrochemistry.

The screenings will take place at 30% occupancy of the hall, according to the issued order and in compliance with all prescriptions of the Ministry of Health.