Home    News    "Society for Spiritual Events" revives the musical history of Burgas on the occasion of its twentieth birthday
Font: A A A
23 March 2021   Print 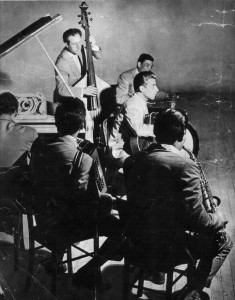 Association "Society for Spiritual Events" - Burgas will celebrate 20 years since its inception with a concert, film, print media and the opening of the monument to the artist Petko Zadgorski. The concert, as well as the film that is being prepared, are in honor of 85 years the birth of the composer Kiril Donchev / honorary citizen of Burgas / and his 60 years of musical creative activity.

Kiril Donchev was born in Burgas on February 21, 1936. In 1959 he graduated from the Bulgarian State Conservatory and worked as a conductor of the Music Variety, then of the Brass Band in Burgas, was a teacher at the Music School in Burgas, composer at the National Theater "Ivan Vazov ". He is the author of the music for more than 240 theatrical productions, over 65 feature films, over 30 documentaries and more. Winner of numerous national and international awards, as well as the Askeer Award for overall contribution to Bulgarian theatrical art.

The project on "Musical Burgas" is co-financed by the Municipality of Burgas through the program to support cultural initiatives. It is carried out in partnership with the State Puppet Theater, the State Archives, the Regional Library "P. Yavorov ”, National School of Music and Performing Arts“ Prof. P. Vladigerov ”- Burgas.

The first sponsor to support the large-scale initiative is the Port of Bourgas. The port is one of the main donors for the construction of the monument to Petko Zadgorski in the Sea Garden of Burgas. The monument has been completed and is to be positioned under a project approved by the Ministry of Culture. The author and performer of the bust is the sculptor Rusi Kostadinov.

Civil Association "Society for Spiritual Events" - Burgas was registered 20 years ago and has dozens of members as poets, writers, musicians, artists and other creative people from the spiritual sphere. Through their creative and charitable activities, they have supported a number of initiatives related to the preservation of the historical and cultural memory of the city. One of its manifestations are - searching for archives and memories of old citizens of Burgas; formation of personal funds of artists important for the culture and history of Burgas; search and release of the archive and construction of a sculpture by Petko Blagoev-Pandira; searching for the archives of the Father of Music in Burgas - the composer Georgi Shagunov, painting and studying his unplayed musical works and organizing a concert in his memory under the direction of maestro Kiril Donchev, as well as recording them on CD; restoration of St. George's Day procession in Burgas, together with the hunters and fishermen / held on the initiative of Georgi Shagunov in the last century /; establishment of a House of Music in Burgas, for which the government has already provided the Municipality of Burgas with the building in which the conductor of the 24th Black Sea Infantry Regiment Georgi Shagunov lived for 50 years.

With the help of members of the association and supporters, Izgrev magazine has been published for 20 years. Its new issue will be distributed during the celebration free of charge.