The comedy "Enemy" is visiting Burgas 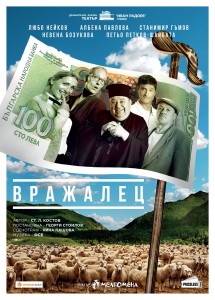 One morning an enemy arrives in a pretty Bulgarian village, who predicts to the mayor, the priest and the two most prominent girls that a river of gold will soon flow to them and someone with a fine craft will help them hide it ...
Like all the naive people who are late for money, the elite quartet of the village grabs the line and frantically starts looking for the photographer Mancho, convinced that he is a man with a fine craft and will help them get rich quick. After discovering the counterfeit money mold in his photo, the mayor, priest Staiko, Tsveta and Bosilka are more than sure that Mancho will not refuse to hire them as collaborators in his lucrative business. Indeed, when he is told that they have evidence of his criminal activities, Mancho admits to making counterfeit money, but unfortunately he cannot help them get rich because he no longer has banknote printing paper. In their desire to benefit at all costs from the gift of the photographer, the mayor and the priest, they formed a joint-stock company in order to raise funds for the paper purchased from Vienna. Almost everyone in the village joins this company, without suspecting that Mancho is a scoundrel who will bring them not only to a begging stick, but also to the brink of despair. And after they send him live with a full mattress of money, less than twenty days pass when he receives a letter to Penyo the bartender, in which Mancho tells his friend that "a friendlier people" than the one in the village he saw and all of them became caricatures in a literary newspaper.

You can buy online tickets only for the best seats in the salon through www.pricelesstickets.bg.

The comedy show will take place on June 14 at 19:00 in the Cultural House "Neftohimika".