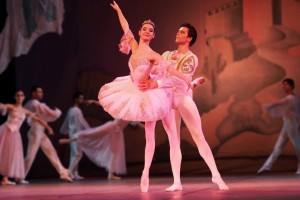 Plays for fans of ballet, symphonic music and the youngest audience - "The Nutcracker", "The Four Twins", a symphony concert and "Alice"

After the exceptional success of the opera "Rigoletto" by Giuseppe Verdi on Friday, when the hall was filled to the permissible 30% of the capacity, for this week the State Opera - Burgas has provided four titles.
After the tickets were sold out for the performance on February 12 of the ballet "The Hazelnut Crusher", to the music of PI Tchaikovsky, choreography and direction - Prof. Hikmet Mehmedov and many fans of ballet failed to enjoy the enchanting performance , the Burgas cultural institution pays homage to them and gives them the opportunity to give an order tomorrow, March 9, at 7 pm, in the Opera Hall.

On March 11, at 11 am, also in the Opera Hall, the musical comedy for young and old "The Four Twins" by Georgi Kostov will tell an interesting story with an instructive ending, which reflects the Bulgarian folk psychology and our typical values, which we should stand for in time. The libretto is by Pancho Panchev, the conductor is Yordan Dafov, the post is by Assoc. Prof. Dr. Alexander Tekeliev, the director is Darina Glavanakova-Bakardzhieva, the scenography is Ivan Tokadzhiev, the artist of the original costumes is Anna Tokadzhieva, the dances are performed in folk style. of Galina Kalcheva, concertmaster is Yordan Kovachev, assistant directors - Lina Peeva and Petar Tiholov. Soloists of "The Four Twins" are: Rositsa Videva - as the Grandmother, Yordan Hristozov plays four roles - the twins Belcho, Pastryo, Chernyo and Zhelcho, as Bonka / Boncho on stage comes Vessela Apostolova, Strina Gena will be Lina Peeva, Chorbadji Petko - Diman Panchev. Ballet dancers from the Burgas Opera troupe also take part in the production.

On March 12, at 7 pm, the young conductor Tsanislav Petkov will conduct the orchestra of the Burgas Opera at the symphony concert, which will feature: Symphony №94 "Surprise" in G major / from the London Symphony cycle / by Josef Haydn, Symphony in in D minor by Juan Chrysostomo Ariaga and "Sarabanda" from "Classical and Romantic" by Pancho Vladigerov Tsanislav Petkov debuted with great success on Friday / March 5 / the opera "Rigoletto by Verdi" and was a guest on the show "Eternal Music" on BNT , with author and host Mario Nikolov / the show was broadcast on Saturday, March 6, on Bulgarian National Television /.

The last event in the creative calendar of the Burgas Opera for this week is the musical for children by Alexander Yosifov "Alice in Wonderland" - on Sunday, March 14, at 11 am, in the Opera Hall. The director of the play, which has been performed more than 100 times, is Darina Glavanakova-Bakardzhieva, the dances are by Galina Kalcheva, the assistant directors are Lina Peeva and Petar Tiholov, who play the roles of Queen Cup and the Hatter. Alice will be Vessela Apostolova, the Red Cat - Yordan Hristozov, Rabbit - Miroslav Dimitrov, Prince Heart - Milen Dinolov. The ballet of the State Opera - Burgas also takes part in the fresh performance, which is invariably greeted with smiles and applause from young, old and even older.

For the conductor of the concert on March 12 in the Opera Hall - Tsanislav Petkov:
Tsanislav Petkov is only 31 years old, but has an enviable career as a conductor. Born in Ruse in a family of pianists. He completed his secondary education with a degree in piano at NUMSI "Prof. Pancho Vladigerov ”- Burgas in the class of Julia Nenova.