The film "Petya na moya Petya" will be the final touch at the "Sofia Film Fest on the Beach" on March 26 in Burgas. 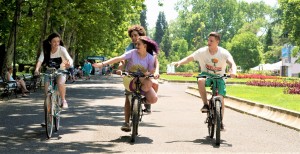 Sofia Film Fest on the Beach closes with a screening of "Petya na moya Petya" on March 26 in Burgas. This was announced today during a press conference by the film's producer Nikolay Urumov and the deputy mayor of Burgas municipality Diana Savateva. The screening is planned to take place in the renovated Cultural House of Petrochemistry. Expect more details about the upcoming event in March. Until then, watch the latest teaser of the movie to know what to expect when the lights in the movie theater go out.

"Petya na moya Petya" is a snapshot of modern Burgas, including summer 2019, the sea, the Sea Garden, the Bridge, the beach to the salt pans, the lighthouse and the port, the church "Cyril and Methodius". Many of the scenes were shot at Sofia University "Cyril and Methodius" - the oldest city school, which recently celebrated its 150th anniversary.

It could not be otherwise. Burgas is the birthplace and inspiration for the poet Petya Dubarova. She is not the main character in the film, but she is present everywhere in it with her spirit, talent, wisdom. In the role of the poet we will see the actress Alisa Atanasova, who shows convincingly and excitingly what Petya could have become if she had not chosen to stay forever at 17.

And the main character is actually another Petya - a Burgas girl from our time, sensitive and with creative potential, who tries to keep her ideals, and today it is so difficult that sometimes you feel like giving up everything, even life. ..

Don't expect only sadness and philosophical reflections from this film. It contains everything. One of its valuable qualities is that it shows how creative, thinking and good teenagers can be, which we adults often underestimate. The film may bring some tears, but it will also make you smile and teach you some interesting slang words of today's young people.

"Petya na moya Petya" was shot with the financial support of the National Film Center and the Municipality of Burgas. It is a production of "BUFF Pictures", co-producer is "Concept Studio". The cinematographer of the film is Ivan Vatsov, the producer is Nikolay Urumov, the director is Alexander Kosev, the screenwriters are Nelly Dimitrova and Valentina Angelova. In the main roles we will see Alexandra Kostova, Alisa Atanasova, Alena Vergova, Julian Vergov, Yasen Atanasov, Albena Pavlova, Vasil Banov, Monyu Monev, Orlin Pavlov and others. Many of the actors were born in Burgas or have a life connection with it, and nearly 500 locals took part in the shooting of the film as extras.