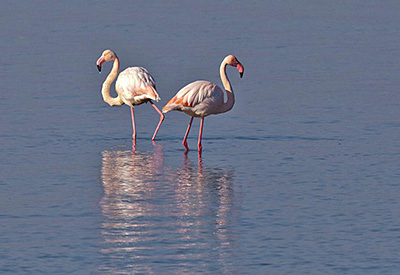 Pink flamingos in Atanasovsko Lake are 5. This is the higher number of species in Bulgaria for nearly 30 years. Six birds were observed in 1985. Yesterday during regular monitoring by ornithologists under program "Salt of Life" LIFE+ of the EU, implemented by Bulgarian Biodiversity Foundation, in the lagoon were seen 5 pink flamingos.

Witnesses say that 3 more flamingos have joined the first 2 birds, which were seen in October 2013 and have stayed in Atanasovsko lake for more than a year. Two of them are bright pink and the other three are beige young birds.