Two new important findings were discovered in the Rusokastro

Home    News    Two new important findings were discovered in the Rusokastro
Font: A A A
17 December 2020   Print 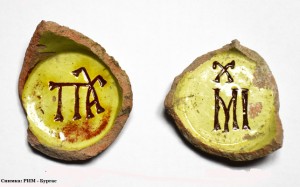 During the excavations of the Rusokastro fortress, two new important finds were discovered, according to the Regional Historical Museum in Burgas. These are bottoms of cups made in the "sgraffito" technique, on which individual monograms are depicted. One of them is named Michael, and the other is a monogram of the imperial family Paleologist.

Similar finds are found in the Black Sea cities - Sozopol, Nessebar, Varna, Kastritsi, Kaliakra, and in the cities near the sea - Rusokastro, Provadia and Shumen. The cups were probably made in Constantinople, and are proof of the lively trade relations between the Bulgarian Black Sea cities and the Byzantine capital. Similar ones are found in the Aegean, in Thessaloniki, Rhodes and on the island of Thassos.