Home    News    Doni and Momchil gather for SPICE Music Festival next year in Burgas
Font: A A A
09 November 2020   Print 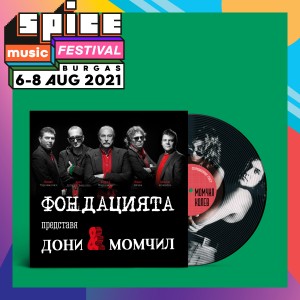 Book now 6, 7 and 8 August 2021 for SPICE Music Festival in Burgas, because next summer it will be one of the biggest music events in Europe!
Participation in the upcoming edition of the festival has already been confirmed by a bunch of stars, and more than 20 years after the last joint concert of Doni and Momchil, they will once again take to the stage in a joint performance with other musicians from the Foundation.

Doni and Momchil's song "Tired Wings" climbed to a high position on the Dutch Billboard, and the English magazine "Q" ranked them among the largest bands in the world in 1997, along with U2 and Oasis.

Promo tickets are still on sale at a price of BGN 89 for the three days, and after the quantities run out, the price will be changed. You can buy a three-day ticket for SPICE Music Festival 2021 online from EPAYGO and in the EasyPay network throughout the country.