Home    News    The Tower-Dungeon in the Rusokastro fortress is completely revealed
Font: A A A
11 September 2020   Print 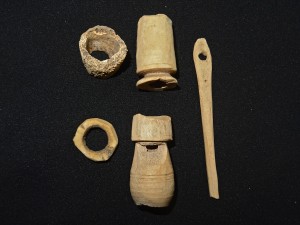 At the end of August, the Dungeon tower in the castle of the medieval town of Rusokastro was fully explored. It is 16 meters long and 11 meters wide. According to the plan is hexagonal. Its walls are 1.9 meters wide. According to researchers, the tower was built in the late thirteenth century. In the 70s of the fourteenth century it was burned down.

The tower was built of extremely well carved stone blocks. The construction was literally perfect. Unfortunately, it is the beautiful stone blocks that have attracted the attention of the local population, who have used the ruins as a quarry for centuries. As a result, only a few stone blocks remain on the walls.

One of the biggest successes in the study of the site is the localization of a workshop for horn products, which was located on one of the floors of the tower. During the fire, part of the production slipped into the basement and has now been discovered by archaeologists.

The archeological research is  done by RHM-Burgas and is funded for another year by the Municipality of Kameno and the Ministry of Culture of the Republic of Bulgaria.